Over at Greg Nyquist and Dan Barnes' blog, Ayn Rand Contra Human Nature, folks have been discussing Founders College. For those who don't know, it's a new liberal arts college in Virginia which obviously has ties to Objectivism (of the ARI variety), but doesn't want to come clean on its connection. (Which isn't to say that it is supported or sponsored by the ARI, which I doubt.)

Here is further evidence of the Objectivist connection.

With this cover to Rand's The Romantic Manifesto: 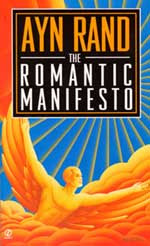 For what it's worth, I think a college with a moderate Objectivist tilt would be a step up from what Russell Kirk called Behemoth State University.
Posted by Neil Parille at 10:05 AM

i dunno, looks sort of... Moslem? with the crescent & everything? except it isn't green? or maybe it's a sun worship thing - that's catching on.

It looks more like atlast holding up the world. If it is, wouldn't that be more of a link to objectivism than its similarity to the anthem cover?

perhaps these folks can speak to the origins of the design?

This story discusses the piece of property next to Founers that was supposed to contain an educational facility. Founders Colelge CEO/Chariman Tamara Fuller discussed a tv station in the over 800 housing units for people to watch the classes at Founders. She also mentioned a Nordstroms, cinema, ponds, golf course and world-class equestrian center.

This part of the business model was touted over and over again, complete with large, architectural renditions.

With Founders College now defunct, the owners of Berry Hill Estate are on
the brink of losing a large tract of land that the college acquired last
year for a much-heralded expansion that never materialized.

A public auction has been scheduled for June 20 at 10 a.m. on the steps of
the Halifax County Courthouse to field offers for 390.4 acres that Founders
College Development, LLC purchased from Eva Harris in May 2007. The sale is
a foreclosure action, said Edward Hodges, an attorney with Clement &
Wheatley in Danville, which is serving as trustee to the transaction.

³There¹s been a breach of the terms of the deed of trust and to that extent
the beneficiary [Harris] Š has asked us to proceed² with the auction, said
Hodges. ³I can¹t really comment on the degree of the breach, only that it¹s
a circumstance that gives them the ability to basically ask the trustee to
exercise the power of sale under the deed of trust.²

Hodges said a public auction was the customary way in the state of Virginia
of handling foreclosure cases. The trustees reserve the right to reject any
and all bids; if the property fails to sell, the previous owners reclaim it
under Virginia law.

Founders College Development LLC, then headed by Tamara Fuller, purchased
the 390-acre tract from Eva Harris for $2.1 million with the intent of
developing the site as a multi-use residential and commercial area near the
college. Plans called for the construction of townhouses, shops and a golf
course close by to the main mansion.

The Town of South Boston, acting at Fuller¹s request, rezoned the site as
planned developmental-residential prior to the college¹s demise early this
year.

Mike Harris, who handled the original sale of the property for his mother,
declined comment yesterday when asked about the possibility of foreclosure.

The land in question is made up of three tracts which together will be
offered for sale at auction. The properties will be sold ³as is² and
qualified bidders must show the ability to meet a cash deposit requirement
of $250,000 or 10 percent of the sale price, whichever is lower.