The first two parts of my series are up at ACHRN Blog here and here.
Posted by Neil Parille at 3:09 AM 2 comments:

1. The Surprise Party From Hell

In PARC, James Valliant says that the surprise party to celebrate the publication of Atlas Shrugged was thrown by Random House (the novel's publisher). I pointed out that this contradicts the Brandens' accounts, which say the Collective threw the party. When I wrote my critique of PARC, I did not have the Sures recollections of Rand published in 2001 as Facets of Ayn Rand. The ARI has now made the book available on the web. The Sures confirm that the Collective threw the party.

This is a minor mistake on Valliant's part, but it should be remembered that he claims that no one has found any mistakes in his book. (Valliant did cite Facets for Rand's view of surprise parties.)

When I confronted Valliant on this mistake in 2007, he claimed he based his account on "various sources." Maybe Mr. Valliant should be a bit more skeptical of his (alleged) sources.

In my most recent post on PARC, I pointed out that Passion of Ayn Rand has a favorable blurb from Alan Greenspan on the back. Greenspan sided with Rand after the Split and knew Rand well until she died. I said that Greenspan had "vouched" for the book. I was taken to task by Valliant and his supporters. After all, Greenspan said only that the book was a "fascinating insight" into Rand's life.

Diana Hsieh notes of Greenspan that, "He endorsed Barbara Branden's smear of a biography with a laudatory quote printed on the back cover. (You can see it for yourself on Amazon.)" So much for Greenspan remaining loyal to Ayn Rand on a personal or philosophical level.

Posted by Neil Parille at 7:33 AM No comments: 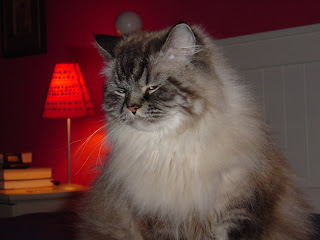 Smokey is the author of books such as Smokey: The Unknown Ideal and The Virtue of Smokey.
Posted by Neil Parille at 4:07 PM 1 comment:

Ayn Rand was one of the best known atheists of the twentieth century. Unlike many non-believers who find much to commend about religion, Rand’s evaluation was almost entirely negative. In this respect she was ahead of her time and has more in common with today’s “new atheists” such as Daniel Dennett and Richard Dawkins.

Rand’s shortcomings as a philosopher are magnified when it comes to the philosophy of religion. Unlike her writings on ethics and epistemology (where she showed at least a moderate acquaintance with its subject matter and familiarity with some representative thinkers), it doesn’t appear that Rand had even a superficial knowledge of religion or even a passing familiarity with thinkers such as Augustine, Luther and Calvin. The one religious thinker she admired, Thomas Aquinas, is never quoted. Her interest appears more in critiquing its ethical teachings and psychological implications than in the arguments theologians put forward for its metaphysics and epistemology. Even here, her interest was quite narrow, being generally limited to contemporary and medieval Catholicism. She devoted two essays to recent papal encyclicals. In "Of Living Death," she critiques Paul VI's encyclical Humanae Vitae (which opposed artificial contraception) and in "Requiem for Man" she critiques his Populorum Progressio (a discussion of economics). When she discusses religious ethics, she seems to think they are universally synonymous with the worst excesses of medieval asceticism.

Rand’s bugbear is what she called “mysticism,” and defined it as follows:

“What is mysticism? Mysticism is the acceptance of acceptance of allegations without evidence or proof, either apart from or against, the evidence of one's senses and one's reason. Mysticism is the claim to some non-sensory, non-rational, non-definable, non-identifiable means of knowledge, such as ‘instinct,’ ‘intuition,’ ‘revelation,’ or any form of ‘just knowing.’" (Rand, Philosophy: Who Needs It, pp. 62-63.)

Rand's definition of mysticism is non-traditional. Anglican theologian Alister McGrath defines mysticism as follows: "A multifaceted term, which can bear a variety of meanings. In its most important sense, the terms refer to the union with God which is seen as the ultimate goal of the Christian life. This union is not to be thought of in rational terms, but more in terms of a direct consciousness or experience of God." (McGrath, Christian Spirituality, p. 187.)

Not only does Rand utilize the term mysticism to describe all religions, but uses it to encompass theories that almost never fall within the common definition of religion. For example, she considers Marxism and racism to constitute forms of mysticism. Avowedly secular thinkers such as pragmatists and logical positivists are "neo-mystics." (Rand, Philosophy: Who Needs It, p. 64.) It might be hard to find a non-Objectivist system of thought that Rand did not consider mysticism or at least "neo-mysticism." Even Ludwig von Mises was a "neo-mystic" who engaged in "whim-worship." (Mayhew, Ayn Rand’s Marginalia, p. 147.) Rand is entitled to reject the arguments for religion or logical positivism, but she isn’t entitled to rule them out of court by a type of philosophical guilt by association.

As is often the case, the “pseudo-psychological trappings” (as Daniel Barnes of ACRHN's blog puts it) of Rand’s argument knows no limit. In “Galt Speaks” from Atlas Shrugged, she provides the following psychological diagnosis of mystics:

“A mystic is a man who surrendered his mind at its first encounter with the minds of others. Somewhere in the distant reaches of his childhood, when his own understanding of reality clashed with the assertions of others, with their arbitrary orders and contradictory demands, he gave in to so craven a fear that he renounced his rational faculty. . . . From then on, afraid to think, he is left at the mercy of unidentified feelings. His feelings become his only guide, his only remnant of personal identity, he clings to them with ferocious possessiveness-and whatever thinking he does is devoted to the struggle of hiding from himself that the nature of his feelings is terror.” (Rand, For the New Intellectual, pp. 160-61.)

Nowhere in Rand’s corpus do we find any attempt to support this diagnosis with evidence. I doubt that Thomas Aquinas, Ludwig von Mises and Karl Marx experienced such a psychological crisis point in their childhood, but as can be seen from Rand’s diaries published in James Valliant’s The Passion of Ayn Rand’s Critics, Rand put great stock in her psychoanalytic abilities.

In fact, Rand’s own psychological needs appear to be the driving force for her embrace of atheism. According to her one-time associate Barbara Branden, Rand became an atheist at age thirteen. Branden records Rand writing in her diary at that age: "Today I decided to be an atheist." Branden reports her as later explaining, "I had decided that the concept of God is degrading to men. Since they say that God is perfect, man can never be that perfect, then man is low and imperfect and there is something above him – which is wrong." (Branden, The Passion of Ayn Rand, p. 35.)

Of the various arguments against God’s existence, this is particularly weak. My feelings about a thing’s existence generally don’t have much to do with its actual existence. I could just as well argue that geniuses don’t exist because that posits someone who is above me. Interestingly, Rand once said that a person could raise his IQ from 110 (moderately above average) to 150 (borderline genius). (Mayhew, Ayn Rand Answers, p. 179.)

When Rand actually gets around to critiquing the metaphysics and epistemology of religion, her results aren’t impressive and more often than not rest on poorly thought out arguments and misunderstandings. For example, in Atlas Shrugged, she claims that theism is contradictory: “God is that which no human mind can know, they say—and proceed to demand that you consider it knowledge.” (Rand, For the New Intellectual, p. 149.) Rand’s description may describe Gnostics and some types of mystics, but certainly doesn’t represent mainstream theists, most of whom believe that God may be known (albeit not exhaustively).

For those who are interested in Rand’s (and Leonard Peikoff’s) abilities as critics of theism, I recommend the essays by Stephen Parrish and Patrick Toner in the Spring 2007 Journal of Ayn Rand Studies.
Posted by Neil Parille at 10:05 AM 1 comment: